Summer Solstice Rituals and the Turning of Seasons

Summer Solstice Rituals and the Turning of Seasons

The summer solstice is the longest day of the year for the Northern Hemisphere that falls between June 20 and 22, and between December 20 and 23 in the Southern Hemisphere. It marks the middle of summer and most cultures of the world commemorate it with festivals, holidays, or fertility-themed rituals. The term “ritual” is derived from the Latin word “ritualis,” which means the proven way of doing something. Read on to learn about some ancient and modern rituals that are closely associated with summer solstice. You might want to keep an open mind as ancient wisdom and rituals are often found to be practical and scientific.

One of the most popular rituals, “wedding” can be directly associated with the summer solstice. Season of harvest begins at this time which adds to the prosperity of families, making it a great time for love and sexuality. Back in ancient times, springtime was considered to be the best time for kids to be born for better health. The strong association of summer solstice with sexuality, love, and fertility could be deduced to the fact that conceiving during midsummer would allow the child to be born during springtime. To elaborate further, if your child was born in winter, s/he was far less probable to survive because back then there were no stores to buy food from, no indoor heating, and no food storage technology.

It eventually became a tradition to get married in June, and it is still the best time to get married in countries that fall in the northern hemisphere. It is a scientific fact that the turning of seasons has a huge impact on your overt behavior and it differs a lot based on your latitudinal distance from the equator. Change of seasons causes changes in lengths of day and night which affects human circadian rhythms, hormonal regulation, and particularly your sleep-wake cycle (SWC). Also, since seasonal affective disorder (SAD) commonly known as winter depression is experienced significantly more by women and younger persons in the northern hemisphere, the winter season was conventionally not seen as a fitting time for conceiving a child.

In ancient Egypt, the summer solstice was celebrated with a special ceremony of extinguishing and rekindling fires in temples dedicated to the goddess Vesta and her Vestal Virgins. It was considered lucky to mate on this day however couples must wait for Vesta’s fire to be ceremoniously washed down the river Nile.

Scandinavian “midsummer festival” was observed on the summer solstice by picking one tree in each city or town, decorating it, and dancing around it. It is now a public holiday and is celebrated as a feast day of St John the Baptist. It is also referred to as Saint John’s Day in Sweden and St. Hans Day in Denmark and Norway. Even Shakespeare must have felt the power of summer solstice to get inspired for writing his magical romantic comedy, “A Midsummer Night’s Dream.”

Another popular ritual, “honeymoon,” is closely associated with Ancient Pagans who celebrated this magical time of abundance by the bonfire in pairs of lovers. They would wear flower garlands to ward off evil spirits and also jump flames together to bring good luck. In pagan terms, four phases of a woman’s menstrual cycle are visualized on a wheel that features the four seasons of the year, four phases of the moon, and the three phases of a woman’s life. Here is a chart that might help you visualize the menstrual cycle correspondences: 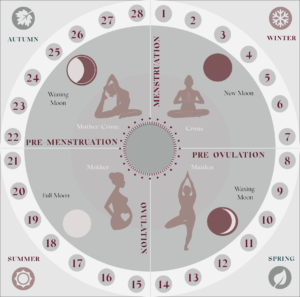 According to this chart, ovulation corresponds to the summer season as it is a time to manifest, procreate, conceive a child, and worship the Sun. You see more Sun, feel more creative, fun, fertile, flirty, and open to making risky decisions!

One of the pagan rituals, “summer solstice altar or red tent” has been brought back where women come together to empower, uplift, enlighten and connect spiritually. One of the popular activities performed is a group ritual of “song circles” around a bonfire. Several introspective exercises are done and the altar is also decorated well with fresh flowers. If you wish to learn more about seasonal rituals based on the movement of the sun, moon, and stars, you might want to check out “Celestially Auspicious Occasions” by Donna Henes. There are several other rituals from other cultures that mark this special day.

Modern life has taken us women way far away from our internal energy and things like menstruation have become private and unspoken, and often a source of embarrassment. You need to learn about period positivity as your menstrual cycle is inherently the process that produces life itself. So, embrace it and give living life in sync with nature a try. For modern women, it is the season to dress up, head out, network, and socialize. If you have a partner, it is the perfect day to get intimate with them and even conceive on this day if you are planning to have a baby.