Gender Equity and the Fight for Women’s Rights

Gender Equity and the Fight for Women’s Rights

On August 26th, 1920, Secretary of State Bainbridge Colby certified the ratification of the 19th Amendment to the Constitution. The amendment would grant women the right to vote. After nearly a century of struggling to add women to the voting populace of the United States, suffrage leaders could proclaim this major victory on behalf of women.

Years later, in 1971, United States Representative and civil rights activist Bella Abzug sponsored a bill in Congress to designate August 26th as “Women’s Equality Day”. It would commemorate the ratification of the amendment, which afforded a Constitutional right that had been denied for centuries to nearly half of the U.S. population.

August 26th is recognized as a day to celebrate the momentous accomplishment of the Suffragettes and how it has led the way to opened doors and shattered ceilings for the women of today.

Clearly, our fight continues. In light of recent events, it’s relevant to highlight the continued struggle for women’s equality on this upcoming National Women’s Equality Day.

What factors affect true equality? What does it mean, and how do we attain it? Let’s consider some significant struggles and victories throughout the history of the women’s movement. Then, reflect and connect to current issues and how bodily autonomy affects health outcomes and should be considered a significant factor in gender equity.

Although the terms seem similar, and while both words address how people are treated, they have different meanings.

Equality means that all individuals or groups are given the same opportunities and resources. Equality is a little easier to understand because it simply means that things are equal; they are the same in every respect.

Equity, on the other hand, recognizes that each person has different circumstances affecting them, and those circumstances should delegate what resources and opportunities are made available. Equity is more about being just and fair to an individual or group of people. Their challenges have not been the same, and therefore social change is necessary for them to become equal.

Fighting for gender equity means fighting to overcome challenges posed throughout history that have developed into systemic discrimination against women.

While August 26th marks a significant victory in the fight for gender equity, the struggle began centuries before.

United States history permeates with female leaders that brought women’s struggles to the forefront and fought for freedom, justice, and their right to liberty. These women would blaze new trails for those who would be their successors in the fight for women’s rights.

Many credit Abigail Adams with making the first political plea for advancing the cause of women. She wrote a letter to her husband, founding father, and future president John Adams, urging him and the Continental Congress to consider women more favorably as new laws were crafted for the burgeoning nation.

In 1776 she wrote, “Do not put such unlimited power into the hands of the husbands. Remember, all men would be tyrants if they could. If particular care and attention is not paid to the ladies, we are determined to foment a rebellion and will not hold ourselves bound by any laws in which we have no voice or representation.” And so began the fight for equal rights for women.

In July of 1848, the first women’s rights convention, the Seneca Falls Convention, was attended by 300 people in Seneca Falls, New York. It was here that the Declaration of Sentiments was drafted, which asserted that men and women were created equally and that women’s inferior status legally, politically, economically, and physically must come to an end. This document was the start of what led to the ratification of the 19th Amendment.

1916 was the year Margaret Sanger opened the first birth control clinic in the United States. Although contraception was considered illegal at that time due to the Comstock Laws, Sanger actively challenged these laws and worked to provide contraception and birth control information to women. Her efforts would lead to the eventual establishment of Planned Parenthood as well as the development of oral contraception.

The 1960s proved to be a radical time for social and political change. In May of 1960, the FDA approved the first commercially produced birth control pill in the world. For the first time, sexually active women would have complete control over their reproductive choices.

Soon after, in 1963, President John F. Kennedy signed the Equal Pay Act, which outlawed discriminatory pay practices based on sex. The act required that women be paid the same wages as men employed in the same role or assigned equal work. The Civil Rights Act of 1965 would also include a ban on sexual discriminatory hiring policies.

In 1972, Title IX gave women athletes equal rights to opportunities in sports at educational institutions, and in 1973 the landmark Roe vs. Wade decision ruled that The Constitution protected a woman’s right to access abortion.

Other interesting facts about the fight:

Despite the progress, women consistently experience denial of rights and lack of freedoms merely because of their sex.

Recent events cast a new feeling around today’s National Women’s Equality Day. The overturn of Roe vs. Wade highlights the ever-growing need for true equality for women in this country.

For all the historical advances of women, the Supreme Court’s decision to turn abortion rights back over to the individual states is a major blow to the Constitutional freedom women had enjoyed since the ruling in 1973.

Throughout the years, Roe has met its share of opposition, but the complete overturn of Constitutional protection for abortion was a shock to pro-reproductive rights individuals everywhere.

Health Equity and the Importance of Bodily Autonomy

There are incredible challenges that face women globally. The term human rights should be readily and fully recognized to include all women. Sadly in many aspects, it does not.

Discriminatory practices exist and put women at a severe disadvantage, and when it comes to health and bodily autonomy, it puts them in danger. It helps to understand how bodily autonomy relates to human rights.

The United Nations Working Group on Discrimination Against Women and Girls defines certain human rights that are vital in defending women’s right to equality.

They define women’s human rights to include “without discrimination equality, dignity, autonomy, information, bodily integrity, respect for private life, the highest attainable standard of health, including sexual and reproductive health, and freedom from torture and cruel, inhuman and degrading treatment.” They believe that the right of a woman or girl to make decisions about her own body and have reproductive freedom is a fundamental basic right.

Health equity depends on women having unfettered access to contraception, including emergency contraception, and the ability to terminate a pregnancy when that pregnancy could adversely affect her health, future, or enjoyment of other basic human rights.

Aside from the social implications of forbidding a woman or girl to make her own bodily decisions, the health implications are worrisome.

Because laws differ in each state and range from states with lenient guidelines and readily available clinics to states with total bans and criminal penalties, this leaves women in many regions vulnerable to a lack of care. 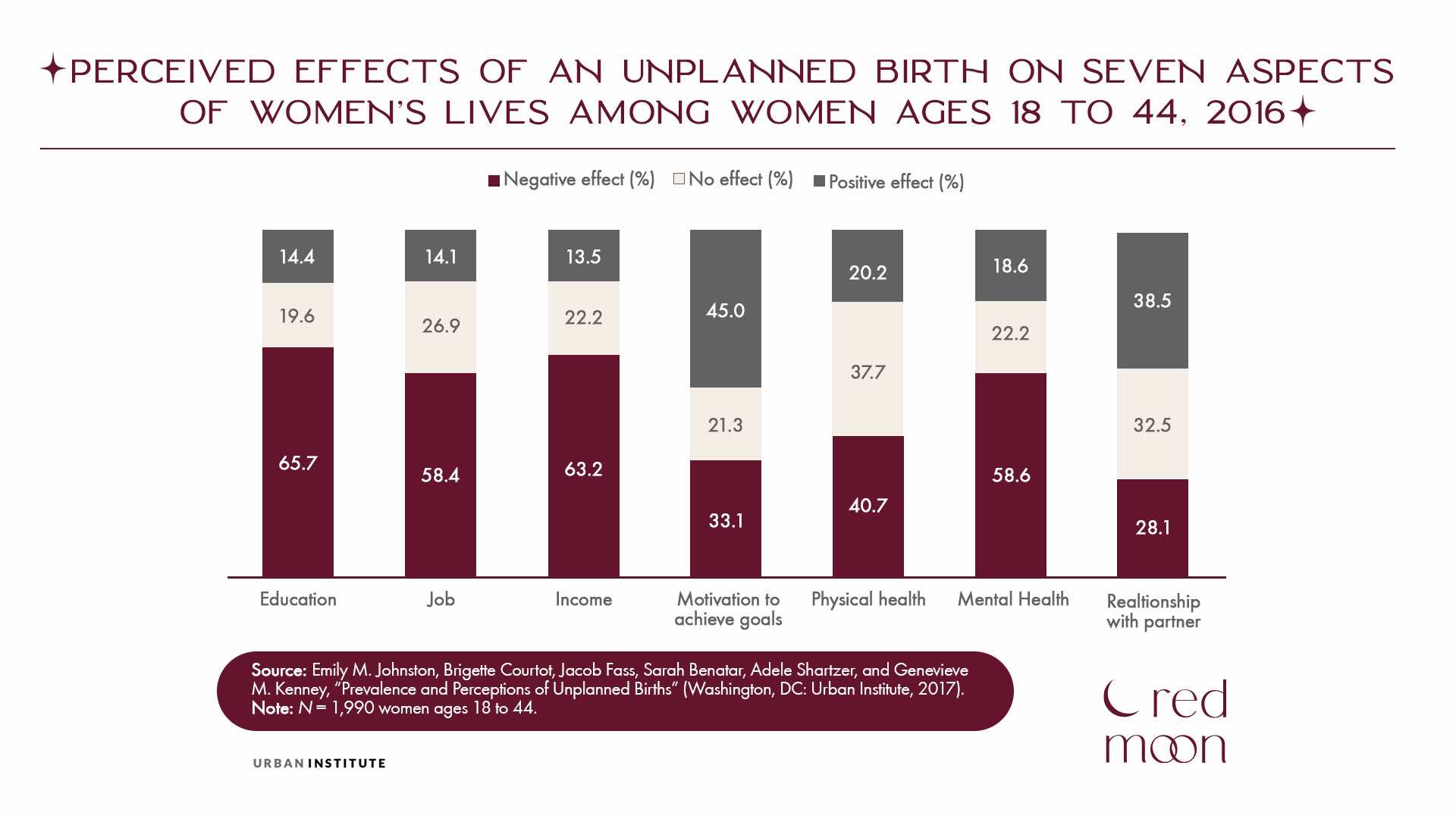 The Turnaway Study examined the mental health, physical health, and socioeconomic consequences of women who were unable to seek abortions for an unwanted pregnancy. The study concluded with significant findings.

Women who’ve been denied an abortion are more likely to:

These findings indicate what a serious economic and social impact bodily autonomy has on our society. Women who are able to exercise reproductive freedom and receive equitable, quality healthcare experience significantly fewer negative effects.

It’s clear that bodily autonomy plays a major role in women attaining equal social, political, and economic rights. The implications of a woman being denied her reproductive decisions are far-reaching and long-lasting.

The fight that began centuries ago to advance women’s place in society still continues today in the workplace, education, and with our bodies. In honor of all those throughout history who’ve triumphed over their circumstances, we’ll strive to make our opinions heard and continue to break down barriers that thwart women’s rights.

At Red Moon, we believe in empowering women by helping them become well informed of positive health care options and providing quality products for feminine care. We understand that women face unique circumstances and should be afforded gender equity while we strive to attain equality.