Fall tends to conjure up our fascination for all things enchanting. It’s almost as if something magical is in the air during these ethereal autumn days, and Halloween really ups the ante of the intrigue.

The spirit (spirits?) of the holiday is all around us, and the witch is an iconic image at the center of spooky season.

Chances are, all month, you’ve encountered images of wizened women peeking out under pointy hats and clutching brooms behind their cauldrons. You’ve probably spotted your share of witch costumes at party stores or Halloween festivities. We’ve even seen the comeback of a beloved witch franchise, Hocus Pocus, revived in its recent sequel. Undoubtedly, witches have a place in modern pop culture.

Often related to sorcery, magic potions, and curses, women assigned the witch moniker bring a stereotypical set of characteristics to mind, but what does witch really mean today? Is it possible that we all have a little (or a lot of) inner “witchy woman”?

They say witch like it’s a bad word, but we know better; consider embracing the magic within yourself!

There’s a rich and interesting history surrounding the origin of witches, as well as an ever-evolving perception of what it means to be a witch. You might just find that you’re drawn to the mystical, magical world and crave a connection to your inner witchy woman.

Witchcraft is typically referred to as the practice of invoking supernatural powers and using sorcery or magic to control people or events. Some extreme definitions of witchcraft even suggest cannibalism and convening with the devil.

Historically, many societies believed a witch was a person born with inherent supernatural powers. However, it tended to be a more widespread belief that witches were ordinary people who chose to learn and practice the art of witchcraft.

Although some who were labeled as witches did, in fact, practice witchcraft, others were simply natural healers whose occupation and practices were based on the belief in the supernatural, which was common in many cultures.

In fact, during the Middle Ages, many women were lauded for their work at healing. Known as wise women, they used herbs, poultices, ointments, and prayers as their tools. They were essentially the medical doctors of their time.

In early Modern Europe, the presence of wise women was prevalent, and they played an essential role in developing early medicines, treating illnesses and injuries, and assisting in childbirth.

But as religious and social views began to change, so did the perception of these women. Eventually, wise women could find themselves accused of witchcraft even though healing was their goal and duty.

During the Renaissance, medicine became a discipline more devoted to the sciences and less reliant on the spiritual. Efforts were made to establish the study and practice of medicine as a restricted profession which meant certain requirements must be met before an individual could treat others.

Licensing practitioners became standard, along with requiring university training, which was denied to women at the time. These new expectations began to push wise women out of their profession.

Pressure from the emerging medical community, the state, and the church resulted in women who were once considered healers in their villages becoming vulnerable to accusations and attacks. Most of these were unfounded but served as a way to remove them from the medical field and stifle their ability to continue their spiritual healing methods.

In Europe, by 1660, nearly 80,000 suspected witches had been executed. Although on a smaller scale, the same was happening across the Atlantic within the settlements of the colonies.

Perhaps the most famous witch hunt occurred in Salem, Massachusetts, between 1692 and 1693. During this time, more than 200 women were accused, 30 were found guilty, and 19 were executed on charges of witchcraft.

These days, witches connect much more to solstices than to Satan. Wicca is a modern-day pagan religion practiced by more than one million Americans that incorporates herbalism and other natural objects into rituals. Many of those who practice Wicca refer to themselves as witches.

Although there are differences among individuals and groups who practice the Wiccan religion, many worship a male god and a female goddess. Many others consider themselves atheist, pantheist, polytheist, or simply respect the symbolism of gods and goddesses as spiritual figures.

Rituals in Wicca often include holidays centered around phases of the moon or solar equinoxes and solstices. Most modern witches revere nature’s seasons, the cycles of the moon, and the earth’s elements. They believe that these components, along with one’s own spiritual self, are to be regarded as the driving forces that shape one’s life. 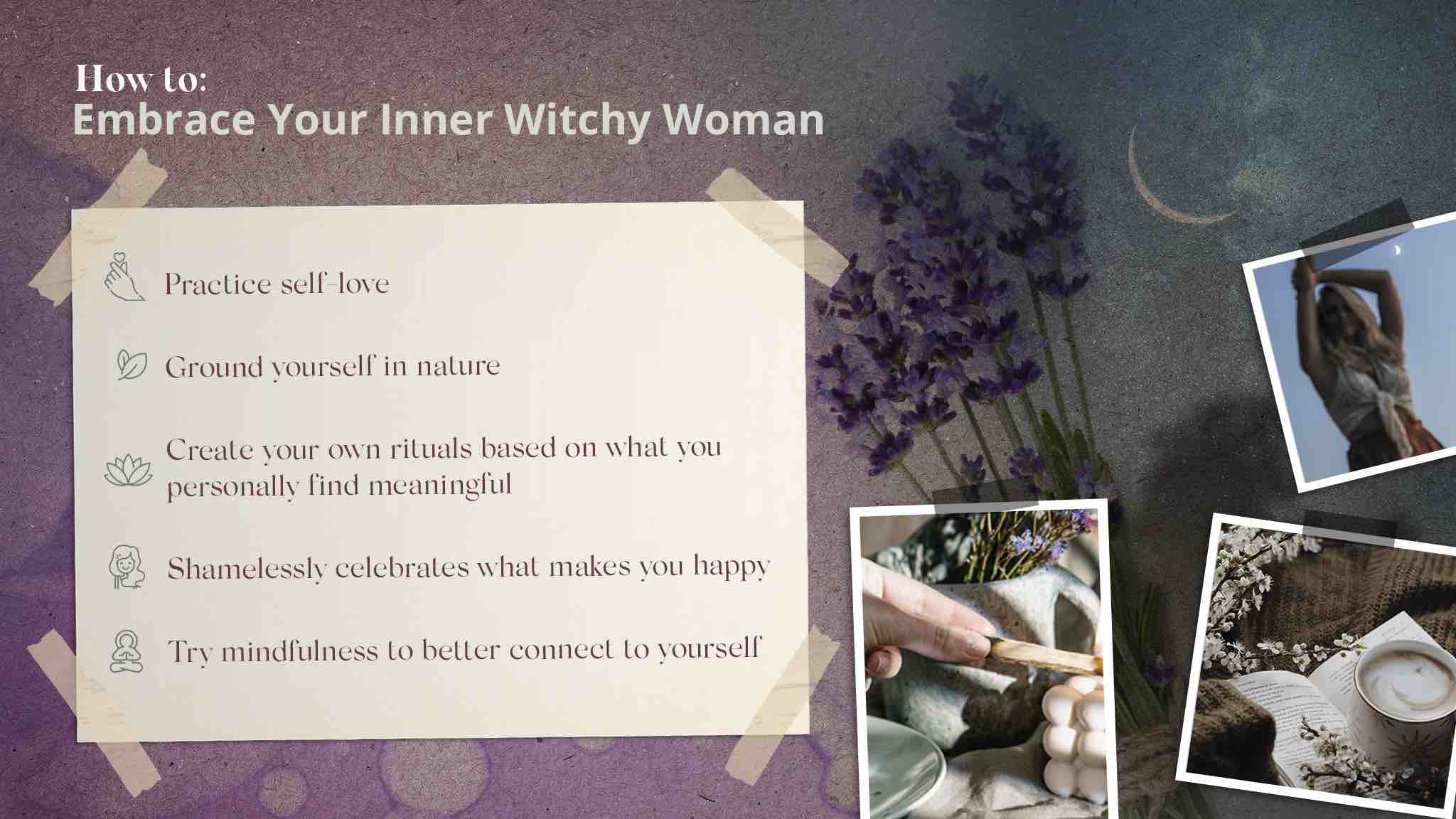 How to Embrace Your Inner Witch

Founder and creative director of Sabat Magazine, Elisabeth Krohn, revives the image of a witch and elaborates upon Wiccan principles with her modern-day definition. She states, “to me, a witch is an empowered person, someone who can see the nuances of the world and work with them, and who is not afraid to fight for what she/he wants or believes in. I don’t think you have to be far into the world of esoterica to call yourself a witch in this day and age; you just have to trust yourself and see beyond the surface mechanics around you.”

Sabat Magazine, a publication that is described as “fusing witchcraft and feminism, ancient archetypes and instant art,” aims to evolve the popular culture image of a witch in a more positive and accurate representation.

As Krohn suggests, a witch embraces her surroundings and is bolstered by beliefs and instincts of their own. Here are some simple ways to conjure a connection to your inner witch and make something magical happen for you!

Appreciate yourself and keep your own well-being and happiness in high regard! Self-love means you don’t sacrifice yourself to please others and won’t settle for less than you deserve. Prioritize yourself, set healthy boundaries, and listen to your body; treat yourself as you would someone you care about deeply.

Ground Yourself In Nature

Spending time outdoors can do wonders for the mind, body, and spirit. Go exploring and be intentional about noticing all that’s around you! Unplug and tune into all your senses to soak in the natural world. Here are some fun suggestions for finding inner peace outside:

Create Your Own Rituals

We all have daily rituals, but do you perform rituals with added love and awareness? Bringing a spiritual meaning to an activity can be as simple as adding consciousness and a reflective element. What do you find meaningful personally? Consider:

Connect to how you are feeling and your emotional response to the process.

Shamelessly Celebrate What Makes You Happy

A witch wants what she wants and doesn’t make excuses or apologies! The clothes you wear, the food you eat, the hobbies you enjoy, all of them should be a reflection of your genuine desires and bring you happiness.

Try Mindfulness to Better Connect to Yourself

Amplify your inner voice through meditation or practicing the art of manifestation. You can also harness the power inside yourself by listening to music, practicing yoga, or going for a run. Consider a peaceful walk, watching a sunset, or writing in a gratitude journal. Strive for daily activities that help promote positivity and help you center yourself.

Perhaps the act of embracing your inner witch can be best summed up in the Wiccan rede, “Harm none, do what you will.”

We’re Here for You and Your Inner Witch

As always, at Red Moon, we encourage you to draw upon your uniqueness as a woman and spiritual being to guide you toward living your best life. You are strong, dynamic, and harbor an incredible power to shape your life and influence others.

There are many witchy ways we can embrace that promise to enhance our daily life and improve our holistic wellness. It seems that our ideals and a witch’s way of life go hand in hand.

Set out to try some of these self-improvement practices. No broom or cauldron required.